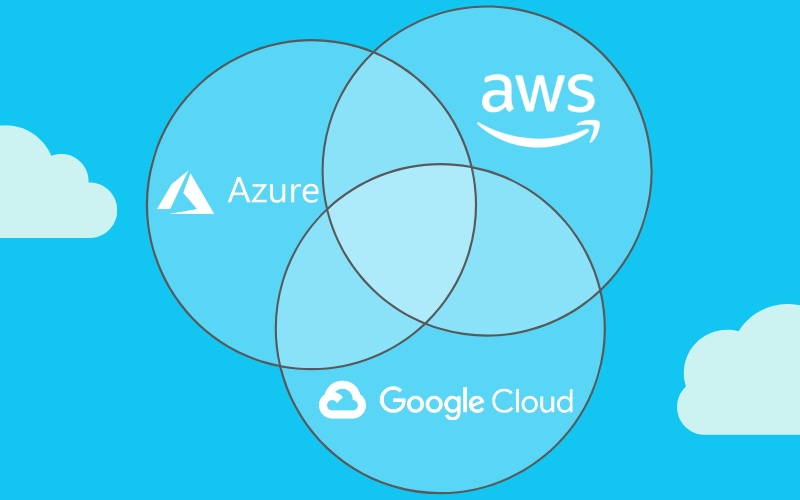 It’s time for our quarterly AWS vs Azure vs Google Cloud market share comparison, including the latest earnings the ‘big three’ cloud providers have reported. Let’s take a look at all three providers side-by-side to see where they stand.

To level-set this comparison, first know that – unsurprisingly – the cloud market as a whole is bigger than ever. Gartner has predicted worldwide public cloud spend to grow 18% in 2021, with 70% of organizations using cloud to increase cloud spending in the wake of COVID-19.

So within that market, let’s take a look at the AWS vs Azure vs Google Cloud market share breakdown and what each cloud provider’s reports shared.

Amazon reported Amazon Web Services (AWS) revenue of $13.5 billion for Q1 2021 – which exceeded analyst predictions of $13.1 billion. This is compared to $10.33 billion for Q1 2020. AWS revenue grew 32% in the quarter, accelerating from 28% growth in the fourth quarter. This quarter, AWS’s revenue accounted for 12% of Amazon’s total revenue – and nearly 47% of Amazon’s overall operating income. AWS continues to bolster the company as a whole with its profitability.

This quarter, AWS announced that former AWS executive and current head of Salesforce Tableau Adam Selipsky will run AWS, replacing Andy Jassy as he moves up to head all of Amazon.

Amazon’s CFO, Brian Olsavsky, said on the earnings call with investors, “During COVID, we’ve seen many enterprises decide that they no longer want to manage their own technology infrastructure,” he said. “They see that partnering with AWS and moving to the cloud gives them better cost, better capability and better speed of innovation. We expect this trend to continue as we move into the post pandemic recovery. There’s significant momentum around the world, including broad and deep engagement across major industries.”

And of course, much of the growth in public cloud comes from net-new workloads, not just those migrated from on-premises infrastructure. We’re curious to see how this trend continues.

While Amazon specifies AWS revenue, Microsoft only reports on Azure’s growth rate. That number is 50% revenue growth over the previous quarter – which is faster than the 46% growth analysts expected. This time last year, growth was reported at 59%. You may see headlines touting that “Azure growth rates are slowing”, comparing those revenue growth percentages. However, the metric is of questionable value as Azure continues to increase revenue at this enormous scale.

Here are the revenue numbers Microsoft does report. Azure is under the “Intelligent Cloud” business, which grew 23% to $15.1 billion. The operating group also includes server products and cloud services (26% growth).

Microsoft sees its cloud growth as fundamental to its success. CEO Satya Nadella said, “Over a year into the pandemic, digital adoption curves aren’t slowing down. They’re accelerating, and it’s just the beginning. We are building the cloud for the next decade, expanding our addressable market and innovating across every layer of the tech stack to help our customers be resilient and transform.”

The lack of specificity around Azure frustrates many pundits as it simply can’t be compared directly to AWS, and inevitably raises eyebrows about how Azure is really doing. Of course, it also assumes that IaaS is the only piece of “cloud” that’s important, but then, that’s how AWS has grown to dominate the market.

Nonetheless, Microsoft’s cloud business is clearly generating success for the company. Intelligent Cloud delivered the highest operating income of all segments this quarter at $6.4 billion, which is 37.7% of total consolidated operating income.

This quarter, Google Cloud reported revenue of $4.047 billion, an increase of 46% year-over-year. Operating losses were $974 million, compared to losses of $1.73 billion one year previously.

Like the other giants, Alphabet highlighted its cloud growth. Google and Alphabet CFO Ruth Porat said, “We’re very pleased with the ongoing momentum in Google Cloud, with revenues of $4.0 billion in the quarter reflecting strength and opportunity in both GCP and Workspace.”

Alibaba cloud revenue grew 37% year-over-year to $2.6 billion. They mention that “the slower revenue growth during the quarter was primarily due to revenue decline from a top cloud customer in the Internet industry. This customer, which has a sizeable presence outside of China that used our overseas cloud services in the past, has decided to terminate the relationship with respect to their international business due to non-product related requirements.” They believe their remaining cloud customers are sufficiently diversified to prevent such a large impact from a single customer in the future.

When we originally published this blog in 2018, we included a market share breakdown from analyst Canalys, which reported AWS in the lead owning about a third of the market, Microsoft in second with about 15 percent, and Google sitting around 5 percent.

In 2019, they reported an overall growth in the cloud infrastructure market of 42%. By provider, AWS had the biggest sales gain with a $2.3 billion YOY increase, but Canalys reported Azure and Google Cloud with bigger percentage increases.

Bezos has said, “AWS had the unusual advantage of a seven-year head start before facing like-minded competition. As a result, the AWS services are by far the most evolved and most functionality-rich.”

Our anecdotal experience talking to cloud customers often finds that true. It seems clear that in the case of AWS vs Azure vs Google Cloud market share – AWS still has a substantial lead, and their market share remains steady. With that said, all players are pushing growth and innovation and driving public cloud adoption across the board.